"The meat colored humanoids unleash a deafening howl of alarm, a cacophony which echoes throughout the courtyard and deep into all the nooks and crannies of the old mall. Immediately, answering shrieks and snarls respond and shadows of tall, skinny figures appear on the walls..."

In the twisted, dark future of 24th century America, heroes are needed more than ever. Do you have what it takes to rise up and answer the plea for help of hard pressed humanity?

In this adventure, the characters are recruited to investigate the disappearance and whereabouts of missing townsfolk beneath the recently re-inhabited farm-fortress of Walsave. Through a series of underground expeditions, they soon discover that there is more to these kidnappings than meets the eye, and that these explorations under the Earth aren't just ruin-crawls into the crumbling, artifact rich confines of an ancient shopping complex. Besides the pitfalls and nightmares of the subterranean hell, they must contend with conflicting interests among the villagers as well, including raiders, a bizarre cult, and the ruling founders of this fortified settlement.

Can your characters survive the challenges that await them, or will they meet their end someplace deep below the rubble and junk of a besieged post-apocalyptic village?

The Mall of Doom uses the Outland SystemTM game mechanic and requires only The Mutant EpochTM hub rules RPG game book to play. Although set in the Crossroads Region over former Los Angeles, and a half day's ride from the sprawling, poverty ridden city of Overpass, the game master can easily drop this adventure into his or her own campaign region. Designed for 6 to 10 first rank characters, this adventure could take surviving characters to the third or fourth rank. Here's what's included in this terrifying, fast paced adventure:

• Multi-Path adventure design: never plays the same twice. Designed for group gaming or you can test your survival instincts, knowledge of The Mutant EpochTM, and wits by solo playing. • PG14 rating due to some of the suggestive themes, horrific circumstances and descriptions; this adventure is not for the squeamish.  • 60 Illustrations • 5 Player Handouts • 6 Maps • 1 New Creature • 2 New Relics • 136 Pages 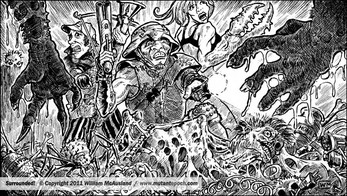 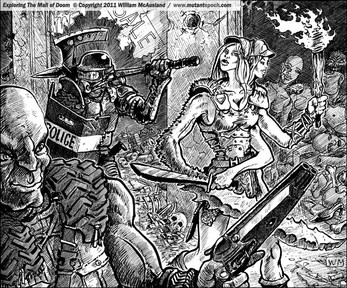 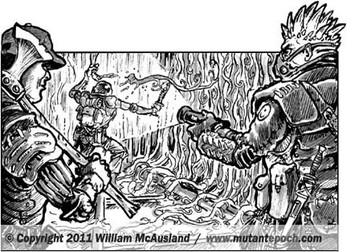 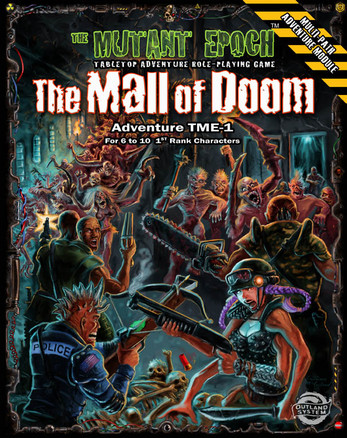 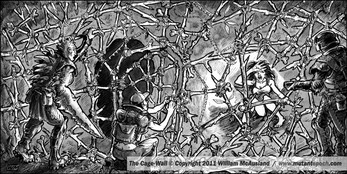